So, how did Diggit come about?

Diggit, Inc. was born out of a mother and son collaboration between Elena and Paul Shemeta of the Seattle area. This northwest duo's first gardening tool hit the market in 1997 at Seattle's Fremont Sunday Market. It had a black handle and the advertising was a piece of cardboard with magic marker that said "weeding tool $5.00". They sold out of all 10 diggit tools they'd brought to the market that day. While Paul was tasked with the refinement of the tool and the fabrication process, he credits Elena for the creation of Diggit, Inc. It was Elena who was responsible for the initial concept and the drive to get it to market.

Elena has fine arts background and an imagination that just won't quit. So, when she got fed up with the mess that a weeding claw was making of her soil (only to leave virulent weed root fragments behind) it was only natural that Elena would go in search of a better tool. After rummaging around her cluttered cellar for some time, her tool of choice was a foot-long tent stake. When she began weeding with the tent stake, to her surprise, it worked phenomenally. It uprooted the weeds efficiently and cleanly, roots and all.

After using the tent stake for some time, Elena realized how useful this could be as a weeding tool for other gardeners. When Elena convinced Paul (who was now an accomplished mechanical engineer) that they should figure out how to refine and produce it in volume, they were on their way.

Paul worked for a year perfecting the tool. According to him, his process was "a lot of trial and error with assembly methods, the design and size of the tool, digging weeds at halftime during football games, asking people their opinions about the latest design..." Using it was the real key for Paul though. He went through a lot of different handles before settling on the one they use now. He knew it was the right one because even during intensive weeding sessions, he says, "It didn't give me blisters."

Paul and Elena have come a long way since they sold those first Diggit tools at the Seattle Fremont Sunday Market. With an enthusiastic customer base that gives great feedback, Elena's ingenuity and determination and Paul's technical know how and passion for problem-solving, the Diggit tools just keep coming and keep getting better and better.

Customer feedback has been vital to the evolution of the Diggit tools. In fact, Elena and Paul credit their customers with the creation of the Premium Diggit 2.

Though the Original Diggit tool was made for gardeners who, like Elena, are exasperated by the seemingly endless battle with garden weeds, Diggit customers have used it for much, much more. Just as Elena did with that original tent stake, their customers have used the original Diggit tool in ways that Elena and Paul could not have foreseen. It was only when customers, using the original Diggit to dislodge large rocks, complained that the tip bent that Paul and Elena decided to make a tool that would accommodate using the tool for more intensive gardening and landscaping jobs. Thus the Diggit 2 was born.

Like the original Diggit, the Diggit 2 has not been immune to the multi-purposing phenomenon. According to one commercial fisherman, it is also a good rope splicing tool - you simply pry the twisted strands of rope apart with it and slip the piece to be spliced in the "V" of the tool.

Likewise, the Diggit Duck was created when Paul's barber needed a tool to get at weeds and grass growing in cracks and between her decorative rock. Customers have also been known to use the Diggit Duck as a hoof pick for horse owners, as a digging tool for archaeologists. It has been used by plumbers to dig up valves and pipes, to scrape goopy stuff off of whatever and to dig small holes in very rocky or hard packed soil. Paul has even used it to dig a sump pump hole in his basement!

More about Elena and Paul 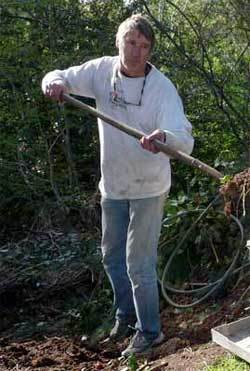 Paul Shemeta in his garden sifting
soil for his grape vines 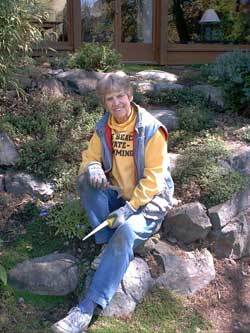 Elena Shemeta in her garden with
the Duck and Diggit

Elena lives just a few miles outside of Seattle in Lake City neighborhood, where over the last few years, with Premium Diggit 2 and Diggit Duck in hand, she has been working at making her gardens drought resistant. She is converting lawn to ornamental grasses, getting rid of invasives and planting more natives and succulents. When Elena isn't gardening or brainstorming new tools, she loves going to garage sales, playing a good game of scrabble, folk dancing and creating new dishes.

As a little boy, Paul remembers gardening with Elena. He "can still remember the smell of good dirt and putting bone meal and peat moss in the planting holes." Now that they each have their own yards to take care of, they don't have the opportunity to garden together much aside from Paul clearing the occasional fallen fir branch or setting up a buried soaker hose.

Though Paul was once an employee of Boeing and loves working on airplanes, he now works for a Boeing supplier which still requires him (happily) to work in their aircraft field twice a week. When he's not in his shop or working on Boeing aircraft, Paul competes in triathalons, skis, travels and listens to music and gardening. Paul resides in North Seattle where his current gardening project is building a 9 by 18 foot green house with water piped in from his 3000 gallon rainwater collection system.

Over the years, through Diggit Garden Tools, Paul and Elena have made lots of wonderful gardener friends. They look forward to the coming years, certain that they will bring more friends and more great Diggit tools.

Paul Shemeta ships Diggit Garden Tools right out of his home in North Seattle. If you need help, please reply via email. We respond the same day usually.